Indigenous peoples occupied this area, with varying cultures over thousands of years. In the historic period that included European encounter, tribes included Algonquian speakers in the coastal area, with Siouan-speaking tribes in the border and Piedmont, and the Iroquoian-speaking Cherokee in the western mountains.

This area was settled by Highland Scots and descendants, who had migrated through the backcountry of Pennsylvania and Virginia. The county was formed in 1785, shortly after the American Revolutionary War, from part of Cumberland County. It was named after Alfred Moore, an officer in the American Revolutionary War and associate justice of the Supreme Court of the United States.

In 1907 parts of Moore and Chatham counties were combined to form Lee County.

Celebrities who frequent or have private homes in the area include athletes Michael Jordan, Tiger Woods, and Jack Nicklaus, and British actor Sean Connery. Past residents of the area have included Annie Oakley, Harvey Firestone, General George C. Marshall, and John D. Rockefeller.

In 1895, James Walker Tufts purchased 500 acres (2.0 km2), and eventually purchased an additional 5,500 acres, of land for approximately $1.25 per acre in the North Carolina Sandhills, with the vision of building a “health resort for people of modest means”. Tufts retained Frederick Law Olmsted to design the village, which features curving lanes and a picturesque central green. 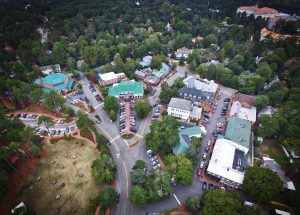 Originally dubbed Tuftstown during development, Tuftstown became the village of Pinehurst, and home of the Pinehurst Resort. In 1980, the village became a municipality.

The first golf course at Pinehurst Resort was laid out in 1897-1898. The first championship held at Pinehurst was the United North and South Amateur Championship of 1901. The best known course, Pinehurst No. 2, was designed by Donald Ross and completed in 1907. Pinehurst Race Track was established in 1915. The resort now has nine golf courses, three hotels, a spa, and extensive sports and leisure facilities.

In 1999, National Public Radio reported that many local business owners in Pinehurst were upset because the Pinehurst Resort was using lawsuits to prevent local businesses from using the term “Pinehurst” in the names of their businesses. The village council sought a written guarantee from the Pinehurst Resort that it would not force any business in the village to remove the name “Pinehurst” from its name unless the business is a direct competitor. The request came a week later in a local newspaper. The village also sued the resort over control of the name shared between the resort and village.

The Lloyd-Howe House, Pinehurst Historic District and Pinehurst Race Track are listed on the National Register of Historic Places.

Scottish emigrants were the first Europeans to settle the area beginning in 1745. They were drawn to the area by bountiful hunting and virgin land, and they founded the communities of Bethesda and Blue’s Crossing by the late 18th Century.

During the American Revolution, the people of what is now Aberdeen were generally Loyalists. There were a few small skirmishes in the vicinity of Aberdeen, most notably the one at Ray’s Mill Creek, in which Colonel Philip Alston of the House in the Horseshoe, who was in pursuit of Loyalist Colonel David Fanning, savagely beat Kenneth Black, a local who had acted as Fanning’s guide through the area.

One of the earliest industries of Bethesda and Blue’s Crossing was naval stores due to the abundance of pine trees in the area. These goods were transported to market initially via the Cape Fear River to Wilmington, and later by plank road.

Over 1,500 residents of what is now Aberdeen participated in the Civil War. Nearly one-third of the soldiers sent were killed, which decimated the labor supply. After the Civil War, however, the Raleigh and Augusta Air Line Railroad connected the community of Blue’s Crossing to the rest of the country, allowing them to sell their naval stores and timber to the rest of the country.

In 1877, a post office was established and Malcolm J. Blue was appointed postmaster. Four years later, Allison F. Page bought numerous forested acres to build a rail line, as well as to clear the land for timber. This land was later sold to James Walker Tufts for $1 an acre, and later became home of the historic golf resort, Pinehurst Resort. Blue’s Crossing’s name was officially changed to the present Aberdeen in 1888.

In the early twentieth century, tobacco farming came to the town. Aberdeen’s proximity to Pinehurst resulted in a boom in the tourism and retirement industries, which remain a major part of the local economy today.

Job Offers  |  Info: There are no items created, add some please.